Why Dragonflies Are Important For Ponds

Home > Blog > Ponds 101 > Why Dragonflies Are Important For Ponds 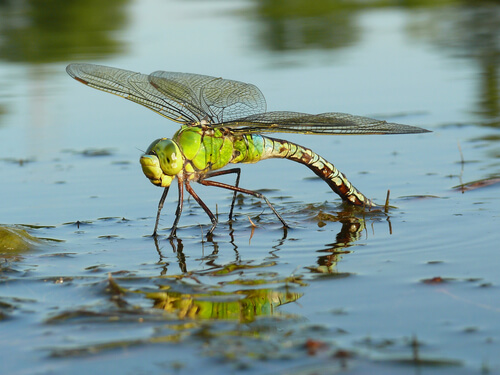 A common concern of pond owners, especially those living in tropical and semitropical climates, is the presence of mosquitoes and other pests. However, when water is correctly managed, not only will these pests be few in number, but other predators may be attracted to the ponds which prey on them. One of the most popular is the dragonfly.

A Brief Introduction To Dragonflies

Like mosquitoes, dragonflies enjoy being around water, because it gives them a place to lay their eggs. When they come into contact with mosquitoes they will immediately begin eating them, as well as any other insect pests which are present. They do this by capturing them using their legs, which when in flight form a type of net. Since dragonflies place their eggs in water, upon hatching the nymphs will consume the mosquito larvae that is on the water’s surface. Upon becoming mature certain species of dragonfly will swarm, where large groups will hover in the air, eating any insects they come across. This phenomenon typically occurs in the afternoon.

How To Attract Dragonflies To Your Pond

Ponds or water gardens which are rich in marginal plants will attract dragonflies. However, it is important to note that dragonflies come in separate species and some require a specific plant stem for egg laying. Some dragonflies prefer the leaves of water lilies while others prefer the stems of lotus flowers. There are still other species of dragonfly that prefer laying their eggs on submerged wood.

If your pond has pump intakes or skimmer boxes, they will destroy a lot of the nymphs due to suction. If you use other mechanical filters, it would give them a greater chance of survival. Another common predator of dragonfly nymphs is fish. This is especially true of larger fish such as sturgeon or koi. Fish enjoy dragonfly nymphs that have recently hatched, so attracting dragonflies to a pond that is full of fish can be tough. The solution is to provide multiple habitats so that the dragonflies have a greater chance of survival. They need a place where their nymphs can be concealed.

The best type of pond for attracting both dragonflies and other species is the wildlife pond. Such ponds typically consist of an edge which slopes along with extensive drift wood that is in the water. A sand beach might also be present. This type of environment will attract dragonflies, which can live between five and seven years. When the weather turns cold, dragonflies survive by either entering wood, muck or plant stems. This is why pond owners have to be careful about cleaning pond muck as doing so could destroy both dragonflies and their larvae.