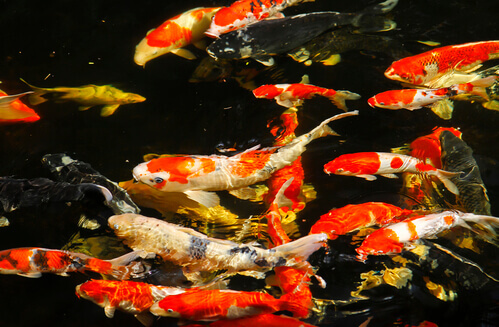 When pond and aquarium experts use the term “dormant” to describe fish, many novice fish owners don’t know what they’re referring to, but below is a detailed description of this phenomenon, whether or not koi “sleep” and what you should do to protect them during winter.

How Fish Respond To Changing Seasons

As winter approaches days will become shorter which will coincide with falling temperatures. Pond fish will respond by entering a stage which is referred to as torpor, or a time in which their physiological activity will decline substantially. This behavior allows them to conserve energy. Like other animals, they also hibernate which results in a metabolism that is slower, reduced nutritional needs and lower body temperatures overall. Your goal as a pond owner is to make this period as comfortable as possible, and to not do anything which disturbs it.

Since fish like fathead minnows don’t have an official schedule or calendar like humans, they will follow the promptings of nature itself. Their cold blooded system means that their metabolism is in tune with the surrounding environment. When the temperature of the water falls, their activity level will respond in kind. Their appetite will become lower, any food they do consume will be digested slowly, and less energy will be expended. Once spring arrives, and temperatures increase again, the fish will emerge from torpor. At this point they will begin searching for food due to their rising metabolism, and will become more active in their environment.

What Do Pond Owners Need To Do?

When referring to fish, the term “suspended animation” is another way of saying that they are dormant. Fish that are in this state won’t necessarily lie down at the pond’s bottom, but they also won’t hang around near the surface either. They will usually float in an upright manner somewhere in the middle, tuck their fins in and suspend themselves in the pond water. As they hover, they might move, but it will be slow, and they will often face the direction that is their destination, but they will move at a speed which is similar to a snail.

There are a number of things that pond owners will want to do to ensure that their fish get a peaceful and safe winter rest. The first is to establish an efficient aeration system. Such systems are responsible for ensuring the water is rich in oxygen. Fish that hibernate are still in need of a fresh oxygen source. Second, you will need to setup a de-icer, especially if you live in a place where the water freezes. The purpose of the de-icer is to create and keep a hole open in the surface of the ice which foments gas exchange.

Many novice pond owners make the mistake of allowing the surface to freeze over completely, and then exacerbate the problem by manually opening a hole by breaking open the ice. Doing so can cause unnecessary stress in the fish, so should be avoided. Make sure the pond is cleaned of debris before winter sets in (preferably at the end of fall) and do not disturb the fish while they hibernate.