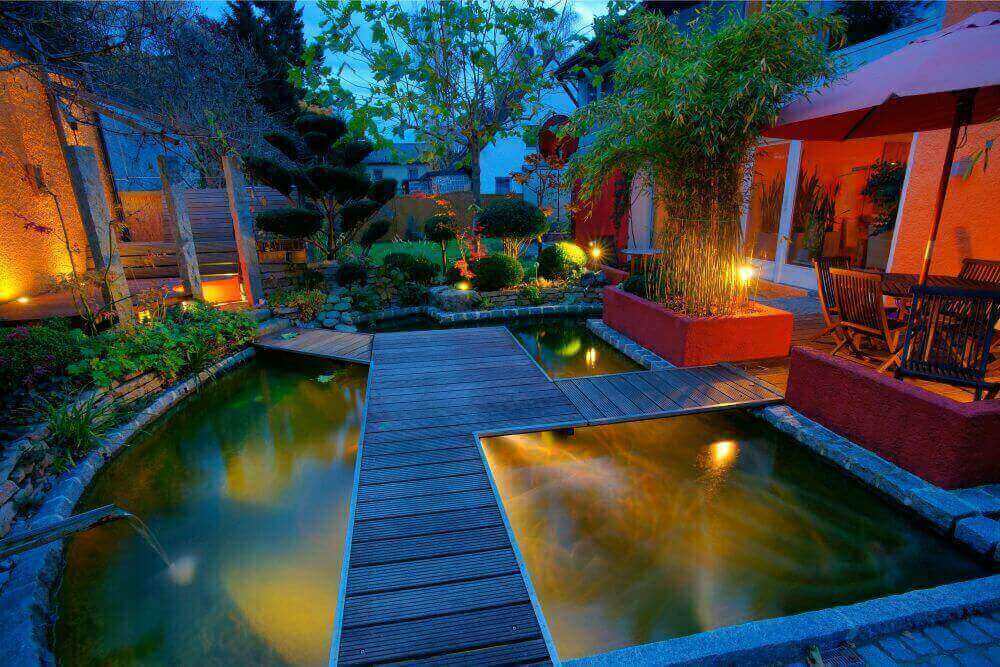 Adding the right pond lighting to your landscape is the best way to enhance it, especially at night. Below are five fundamental techniques which are used by professionals to produce both distinctive and creative illumination once the sun sets.

This effect is achieved by positioning the fixture in back of the feature, so it is aimed at a wall which is adjacent. The result is a backdrop that is illuminated, which produces intrigue due to the many interesting outlines or profiles it creates. Spotlights or well lights are best for achieving this effect.

To produce down lights, you will want to position a fixture in an elevated area, within a feature such as an eave, trellis or tree, so that it casts downward in a specific area. By putting the light even higher you can illuminate a bigger portion of the yard or pond, and when placed lower it can illuminate paths to help visitors move about.

The best lights for this effect are LEDs, and the reason is because they provide a superior contrast when compared to standard flood lights. When the LEDs are placed in close proximity to one another, they will produce bolder illumination. The goal of up lighting is to capture the attention of onlookers so that they focus on the most impressive areas of your property. This could be certain architectural characteristics, or it could be other features such as statues, fountains or trees.

To incorporate moon lighting, you will want to add your down light feature with a guard that is full glare and elevated within a tree and angled down. The result is lighting which resembles the moon as it shines through your branches. The shadow patterns that it produces on the ground are extremely impressive, providing an effect which is both stunning and natural. To get the best results, use it with trees that have open branches.

There are a number of similarities between shadowing and silhouettes. However, the difference is that shadowing puts the fixture towards the feature’s base, while aiming at a wall which is adjacent. The goal is to produce a shadow that is softer, which works best when using a tree that has foliage which is open and delicate. When the tree sways as a result of wind, the movement will add quite the drama. The best lights for achieving this effect are well lights, spotlights or floodlights.

A growing number of landscape enthusiasts are choosing LED lights over traditional incandescent bulbs. The reason for this is because LEDs will emit greater lumens for each watt, can produce light of a specific color free of color filters, and LEDs are smaller which means they can be readily connected to circuit boards. LEDs also light up much faster than classical bulbs. For instance, a typical LED with a red indicator can achieve complete brightness in less than a microsecond.