The Best Pond Temperatures By Season 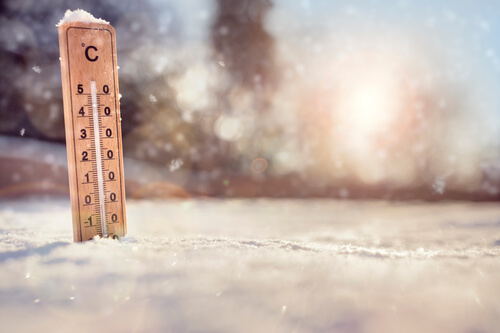 Maintaining the right temperature in your pond is absolutely essential. Certain species of plants and fish thrive at specific temperature ranges, and may become ill or die at others. To make matters more complicated, the ideal temperature for a pond will vary from one season to another.

It takes longer for water to cool or heat up than air, which means every pond owner should have a thermometer in their equipment box. Another factor that will determine the temperature of your pond is the shallowness or depth of the water. Light will decrease in deeper water which means shallow ponds will tend to be warmer, while deeper ponds will be cooler, particularly near the bottom. In winter, the surface of the pond will freeze, but the layer near the bottom will remain warm which keeps the plants and fish alive. The temperature of your pond will also influence how your fish are fed.

Temperatures will start to rise during this season, and the best temperature range is between fifty five and sixty five degrees Fahrenheit. Spring is one of the most dangerous seasons for fish however since they are leaving their dormant state which means their immune systems are not as strong, making them vulnerable to bacteria.

The best pond temperatures during summer are between sixty eight and seventy eight degrees Fahrenheit. During this season the ability of the pond water to hold onto to dissolved oxygen will become compromised, especially if the temperature goes higher than eighty five degrees. Fish are very active during this season and will compete with other pond animals for whatever oxygen is available. Summer is the season when you want to make use of waterfalls, aerators and fountains to ensure the water is oxygenated as much as possible. Aeration equipment can also reduce algae growth, which is always important.

Throughout the USA, temperatures in water will begin to fall around September or October. Therefore, the best temperature for ponds during autumn is approximately seventy degrees.  This temperature will give your plants and fish the opportunity to acclimate to the falling temperatures so they are adequately prepared for winter. By the end of autumn the temperature may be allowed to drop to around fifty five degrees.

During winter many areas in the USA will experience below freezing temperatures, with the exception of California, Florida and some states in the South and Southwest. For those living in the northern U.S. the best temperature is approximately forty degrees Fahrenheit. This temperature will keep the fish healthy as anything below it will cause any water running in the pond from pumps, fountains and waterfalls to freeze. Those who own ponds in the northern part of the U.S. should also make sure they are deep so that the fish are protected as the temperatures fall and the surface of the pond freezes over. Once the surface of the pond freezes it is critical to make an opening in the ice so toxic gases may escape, otherwise they can kill the fish. The best device for this is the de-icer.