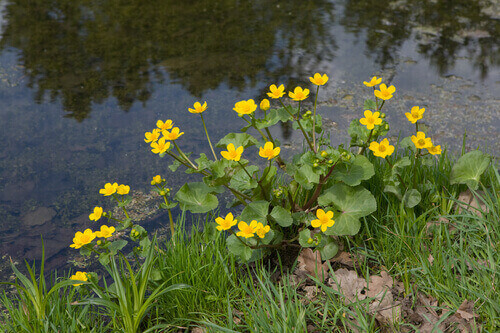 Those who live or have traveled to states in the Southeast or Midwestern U.S. might have noticed flowers with a yellow blossom which resembles a buttercup, which flourish between April and June either in bogs or woodlands. These are marsh marigolds, a plant which can make a great addition to your pond.

An Overview of Marsh Marigolds

Despite their name, marsh marigolds are not related to the classical marigolds found in gardens. Botanists refer to them as Caltha palustris, which is part of the family Ranunculaceae. These plants are perennial as well as herbaceous and aquatic, but caution should be taken if trying to use them as an herb, as they have poisonous buds and leaves which are only safe after being cooked with multiple water coverings. For use in gardens, they are perfectly safe however. Cows enjoy eating them while grazing, and they can reach heights between one and two feet.

The coloration of the flower is visible mostly on the sepal, since this plant lacks petals. The sepals will be born on foliage which is green in color with a waxy texture, and may be shaped like a heart or kidney. Some are also rounded. Some marsh marigolds float, and are typically smaller but are usually only found in the northern states. They have sepals which are pink and white in color. They are also distinctive for their floating stem. These plants prefer an aquatic environment which is rich in oxygen. They do not respond well to fertilizer, especially concentrations of ammonium or phosphate which are high. Their flowers create pollen and large amounts of nectar that will attract insects like beetles.

Marsh marigolds are also known to overwinter while their buds remain close to the marshy soil’s surface. Their roots are strong, with a thickness of between two and three millimeters. They have multiple flowering stems which can be as long as eight centimeters, which will usually carry stipules which are leaf like. The times in which they flower may also vary slightly based on altitude.

Advantages Of Adding Them To Your Pond

When placed in a pond or water garden marsh marigolds will attract both hummingbirds as well as butterflies. They thrive best in woodlands which are moist and their maintenance requirements are low. This makes them an ideal plant for beginners. Marsh marigolds are good at caring for themselves, the main thing that pond owners need to do is plant them like lotus in soil which drains well. Any area which is either boggy or moist will suffice. What you don’t want is for the soil to become dry, because although marsh marigolds are fully capable of withstanding droughts, they will become dormant and then their leaves will be lost. Propagation seeds for this plant will form by the conclusion of its bloom period. Once this occurs they may be collected and planted once they become ripe.