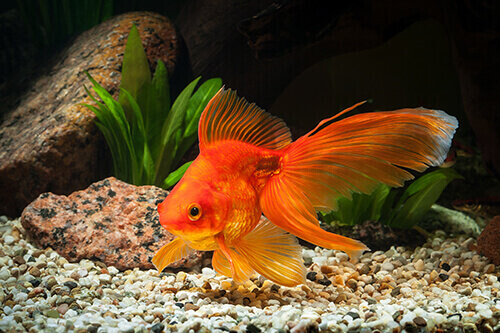 Fantails are a type of goldfish which are well suited to beginners. They don’t require much maintenance, but should be given a sizeable space which is connected to a good filtration unit. Below are some additional things you should know about this species.

Fantail goldfish originate in East Asia, specifically Japan and China. They have a body which is shaped like an egg, with a dorsal fin that is high, a caudal fin which is extended and quadruple, and lack a shoulder hump. Some have scales which are metallic, while the scales of others are nacreous. The fins are split into two halves which match, and while fantails are considered hardy overall, they do have sensitivity to extended exposure in water temperatures which are low. Therefore, when kept in a pond the most optimal temperature is between seventy three and seventy four degrees Fahrenheit.

As with other species of fish, providing adequate space is extremely important. A pond which is too small for the fantail population will quickly become dirty which in turn will lead to all sorts of other problems. A general rule of thumb that you will want to keep in mind is that each fish will require between ten and twenty gallons. This means that if you plan to add ten fantail goldfish to your backyard pond it should at minimum have 100 gallons of water (10 x 10 = 100).

A thermometer should be installed near your pond so that you can monitor the temperatures at all times. This is especially true during winter, since if the water temperature falls to below sixty degrees the fish would be at risk. Heaters and other devices can be used to keep the fish warm; if you live in northern climates that receive harsh winters you should consider bringing the fish indoors until spring, placing them in a temporary aquarium.

When it comes to nutrition it is essential that the fantails are fed premium quality food. These fish love flakes and pallets, as they have the important nutrients needed for them to thrive. Between the two, pellets are considered by many to be superior since flakes are prone to crumbling, which makes it tougher for the fish to consume.

A quality filtration system is a necessity for any pond or aquarium. Stay away from brands that create too much current, since this is unhealthy for the fish, which don’t respond well to them. Additionally, make sure the pond is cleaned regularly. When doing so you will want to replace between ten and fifteen percent of the water. The fantails themselves don’t have to be removed when this occurs, and when you clean the pond makes sure the replacement water is dechlorinated tap. Wipe away algae which you detect near the bottom.

When dechlorinating water you’ll have to acquire chemical neutralizers, which can usually be found at local pet shops. Read the instructions carefully, as usually they will require you to place up to two drops for each gallon of water, and will take effect within a couple of minutes.