How To Prevent Japanese Beetles From Damaging Your Pond 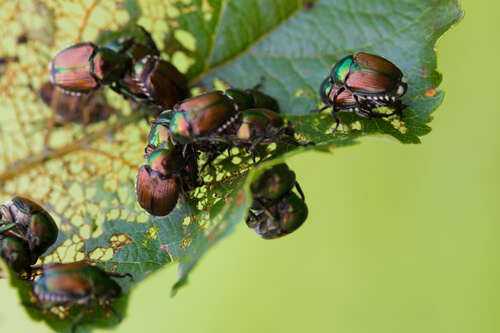 The Japanese beetle is a type of scarab which is native to the islands of Japan. There, its impact on the environment is minimal, since there are natural predators which control it, but in the United States and elsewhere, these beetles can become a real problem, as they destroy various types of plants. Some pond owners have encountered them, and below are some tips for keeping them under control.

How These Beetles Behave

Like most beetles, Japanese beetles transition through four stages, which are egg, then larva, then pupa and finally adult. They lay their eggs in clusters near the surface of soil after which they will hatch in about two weeks. At this point the larvae will feed on any plants or organic material they find in their vicinity. Once they grow into grubs their impact on pond plants will be far more significant.

The larvae can hibernate during winter months, forming miniature cells within soil. Once the temperature of the soil rises during spring, they will emerge. The Japanese beetle will spend most of its existence in the form of larva, with only thirty to forty five days being an adult. Adult beetles prefer feeding on leaves, and make use of pheromones to attract more beetles, which can quickly lead to an invasion in which pond plants can become overwhelmed, with their leaves and petals becoming completely consumed.

How To Get Rid of Them

The most common technique used to eradicate Japanese beetles is the beetle trap. This device uses a pair of walls which are crossed and which have a container beneath them, and use a special pheromone to attract the bugs. Once the beetles become trapped they will quickly succumb. However, this elimination method has been criticized, because although the trap attracts beetles many will not become trapped, and will instead land on plants nearby, which causes additional damage.

Therefore, if you’re going to use a beetle trap, you need to be sure it is far away from your pond or water garden.  It has also been said that certain types of plants which are aromatic, like garlic or catnip, will discourage the beetles from coming. Another method which has proven highly effective is specialized bacteria. Developed by the USDA, it takes advantage of the vulnerabilities that these beetles have during their larval stage. When added to the pond or water garden in the form of a powder, it will destroy any Japanese beetles that try to establish themselves, without harming other plants and animals.

Finally, Japanese beetles can also be removed by hand. They are easy to spot and lack the ability to quickly evade, so all you have to do is pull them off the plant and crush them. If a plant is covered by multiple beetles, simply shaking it a bit will make them fall off. Some who own koi ponds have reported that the koi will consume these beetles, which makes sense since koi eat just about everything and are originally from the same part of the world.