How to Detect And Repair Pond Leaks 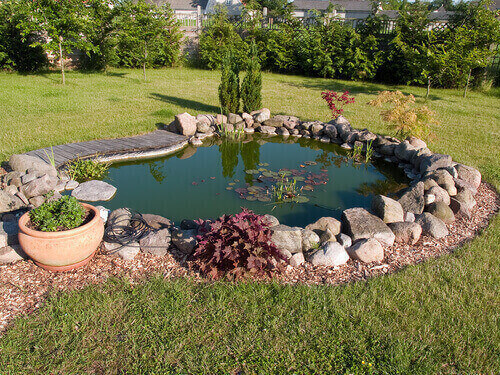 At some point every pond owner will encounter a leak, and they can be frustrating to deal with when you don’t know what to look for. So the first step in repairing a pond leak is identifying it, and below you will learn how to do it.

The majority of pond leaks will come from either waterfalls or streams, both should be inspected first. Dirt will settle around the waterfall and stream over time, which may produce low spots which can cause the water to move over the liner’s edge. Look for spots which have gravel and wet mulch, or areas which are overly muddy near the pond’s perimeter. Should you identify a location that is leaking, all you will need to do is lift up your liner, and push the soil beneath it until the edge is raised. This should correct the issue.

Sometimes leaks are also a result of water splashing from the stream. To repair these types of leaks you will want to make adjustments to the rocks that are beneath or around the waterfall and stream. This should either contain the splashing or redirect it so it isn’t reaching certain areas. This is probably the simplest and most cost efficient way to repair a leak. However, leaks can also occur from other causes and sources.

Evaporation is another common cause of pond leaks. It results from water being transformed into vapor, which then leaves the pond. Naturally, this will lead to water loss over time, the amount of which will vary depending on the season and area where you live.  Ponds which are situated in places that have moderate temperatures with extensive humidity might lose from one to one and a half inches of water every week during summer and spring.

Ideally, this water loss resulting from evaporation should be replaced with rain, but those that have ponds in arid regions may not receive sufficient rainfall, and the higher temperatures combined with low humidity could lose as much as three inches of water in a single week due to evaporation. Water losses could be even higher if your pond or water garden is rich in streams and waterfalls, as the water movement and splashing will cause additional evaporation.

How To Detect The Cause

The first step in detecting the source of a leak is to fill up the pond to the proper level, then unplug your pump. Allow the pond to sit idle for about twenty four hours, and then measure the water level. If the level of water remains unchanged, this means the leak does not originate within the pond itself. Investigate the plumbing, the connections for the pump and fittings.

If the level of water has fallen, this means the leak is being caused by something within the pond. To determine the source, let the water level drop further, until it stops. The level where it stops is where the leak is occurring. A leak which results from a hole can be patched.