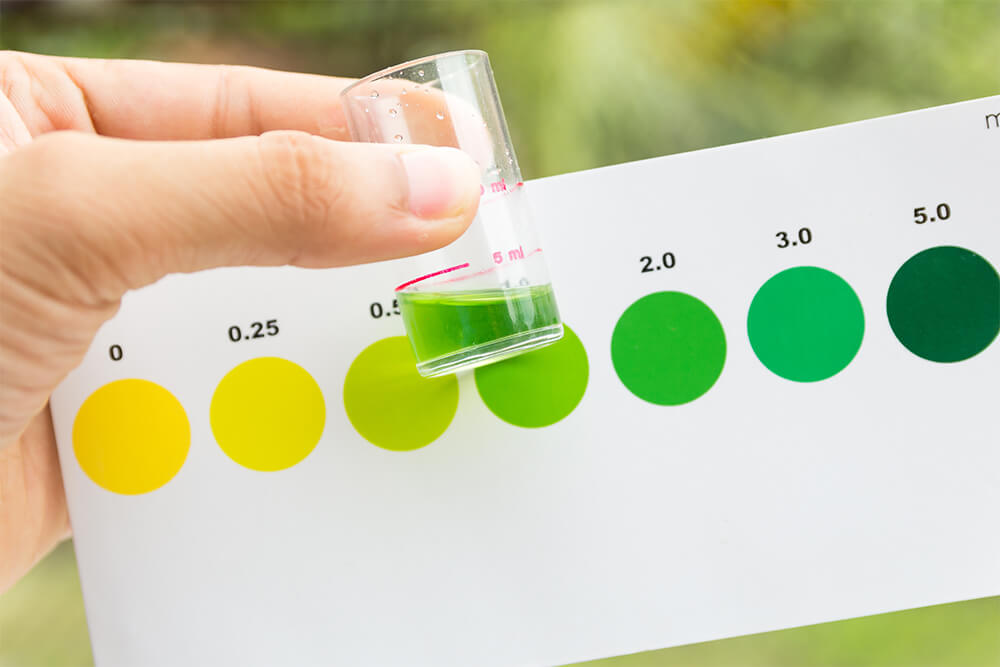 Ammonia poisoning is a serious threat to your pond fish, especially if the pond is newly constructed or the biological filter has been compromised. Below is a description of this hazard, why it happens, and what you can do to address and avoid it.

Ammonia stress is the result of an accumulation of nitrites and ammonia within the water. While the danger is greatest within aquariums, it can also cause damage to pond fish, especially during winter when surface water freezes over. Those exposed to elevated ammonia levels for prolonged periods of time will not only be at greater risk of disease, but their organs might ultimately fail.

The reason for this is because higher ammonia levels displace oxygen. More ammonia equals less oxygen for the biological filter and fish, meaning the fish will have greater stress levels and be in danger of suffocating. Elevated ammonia levels are almost always the result of a failure to regularly change the water.

Fish that are suffering from ammonia poisoning will display a number of warning signs, including reduced appetite, gills which are inflamed, lethargy, gasping near the water surface, inflamed fins or eyes. Some fish might also hover near the pond’s bottom, especially those which normally dwell near the surface.

It should also be noted that ammonia poisoning and ammonia stress are basically the same concept. The phenomenon might also be called nitrogen stress or poisoning. However, many aquarium and pond experts don’t use the term poisoning until fish have already been lost. Otherwise the fish are merely stressed.

How To Treat Ammonia Stress

The key to treating this hazard is simple, and that is to immediately test and change your water. Some pond owners choose to use ammonia remover, but this is a bad idea. The reason for this is because it could have long term effects which are adverse, and many have questioned its effectiveness.

Simply removing the water will eliminate the extra ammonia, as long as you’re not using source water which already has elevated ammonia levels. Once the ammonia is reduced the biological filter will be able to do its job and start managing the waste which will lower the stress levels of your fish. While the pond is cycling, you will want to change the water frequently just to ensure the ammonia levels do not accumulate to unsafe levels a second time.

How To Prevent Ammonia Poisoning

The key to preventing ammonia poisoning (and many other fish diseases), is maintaining good water quality. Many people are thrilled with idea of owning a backyard pond, but are less enthusiastic about the upkeep. Some are simply too busy to perform the maintenance needed, and as a result the water quality deteriorates and multiple problems ensue. If you are experiencing elevated ammonia levels frequently, it means your pond is either overpopulated, or your filtration system is not adequate.